It has been my lifelong dream to buy a new (to me) holiday house and furnish it with second hand shopping … if only there was a job in this space I would SO love it.

Alas … I haven’t bought a holiday house … but the next best thing has happened and Elise and Nick have!

And so I have spent the last month helping out by digging through the things stored at my house and happily wading through Gumtree and EBay for items suitable to furnish a holiday house.  Every morning Elise has awoken to a fresh feed of ideas from me.

Mum and Dad have been the lucky ‘storers’ of all found treasure.  And on Friday the removalists transported the 3 bedroom house worth of stuff to its new location in Anglesea. 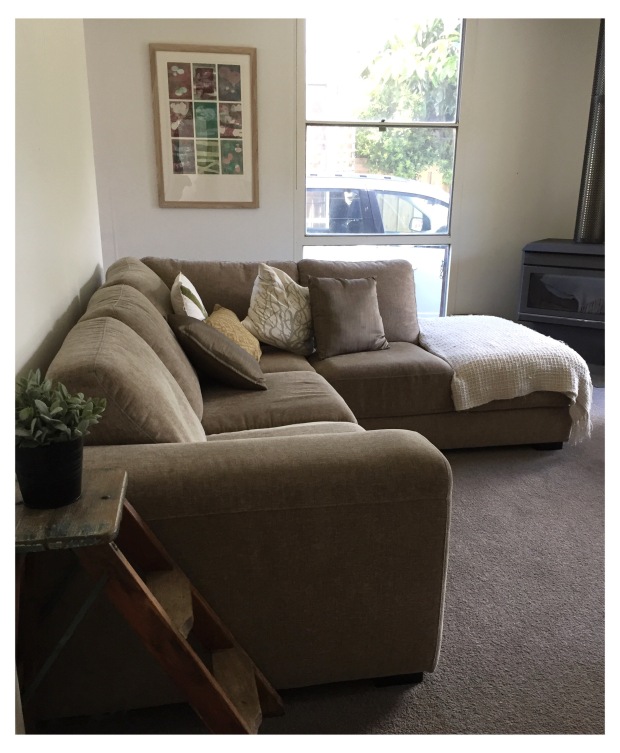 This couch came from a nice girl in Abbotsford (who was moving to Thornbury).  It was given to her by her parents.  Elise bought it on EBay for $100-$200 or something bargainish like that.  I helped her pick it up.  It’s so comfy and in fabulous condition.  The ladder is from Elise’s house.  The print is by Monique Keele (in a Kmart frame).  The cushions are all from op shops.  The plant is from IKEA. 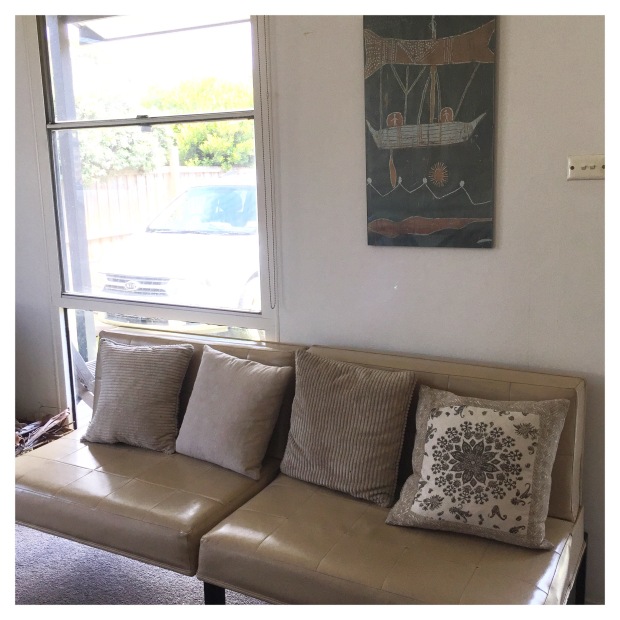 On the opposite wall is this click clack vinyl couch that adds a bit of quirky love to the room.  Elise found it.  With an old framed poster above it. 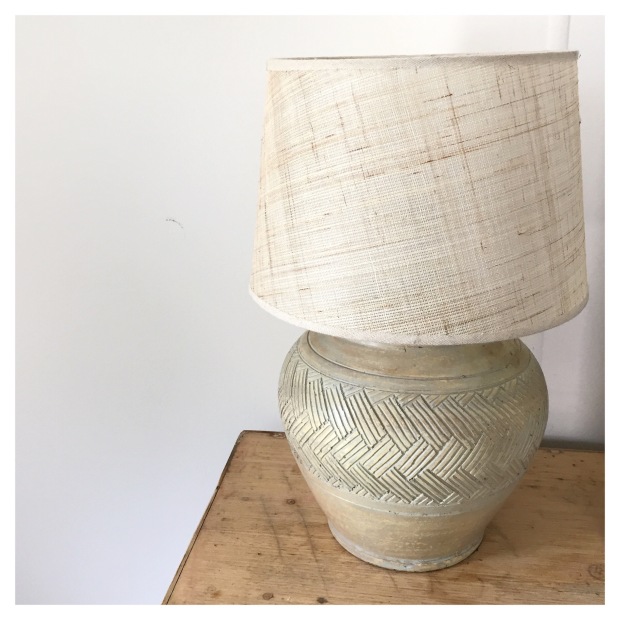 And this lamp combines a base Elise and I found at Vinnies in Kew with a Freedom shade I bought but was no longer using and so donated to the cause.  And sits on a school desk that Dad rescued from Doveton High School way back in the 1980s.  He’s been using it in his garage for years before giving it to our Aunty who used it as a craft table, who in turn offered it to Elise.  This desk is also now home to a flat screen telly rescued from hard rubbish. 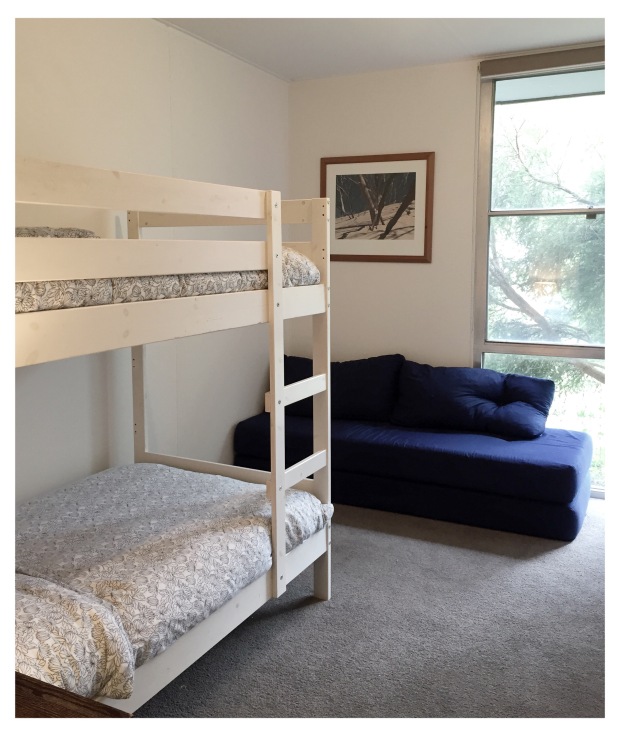 This bunk bed was from Elise’s house (stored in the shed for a while now) and the doonas are ones I don’t use any more.  All originally from IKEA.

I found the divan by the side of the road (hard rubbish) about 5 years ago … and have been keeping it for just such a location.  Artwork (photograph) by Nick!

This room still needs a trundle bed (Elise has one at home that she could use – another one of my hard rubbish finds).

And note that little chest of drawers I found on Rushall Street is in this room too.

The bed frame is from EBay. The lamps are from Gumtree, $10 (picked up in Northcote).  The bedside tables are really solid timber and also bought from EBay (I think) by Elise.  The linen doona is from IKEA.

This little print is in this room too. 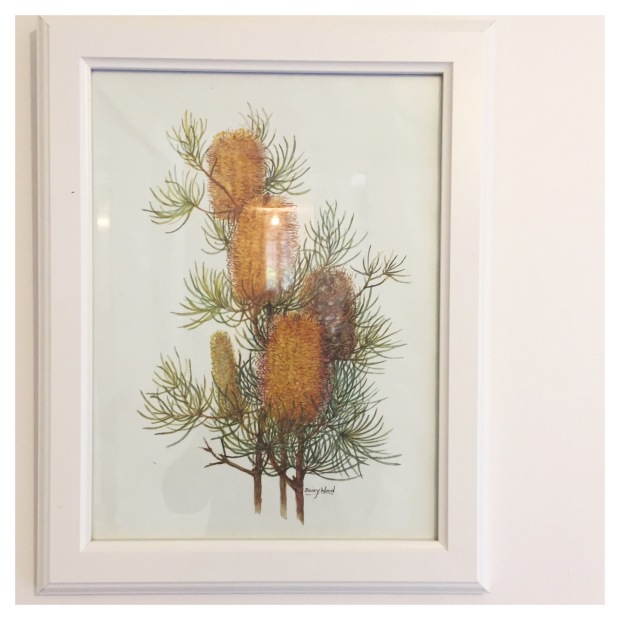 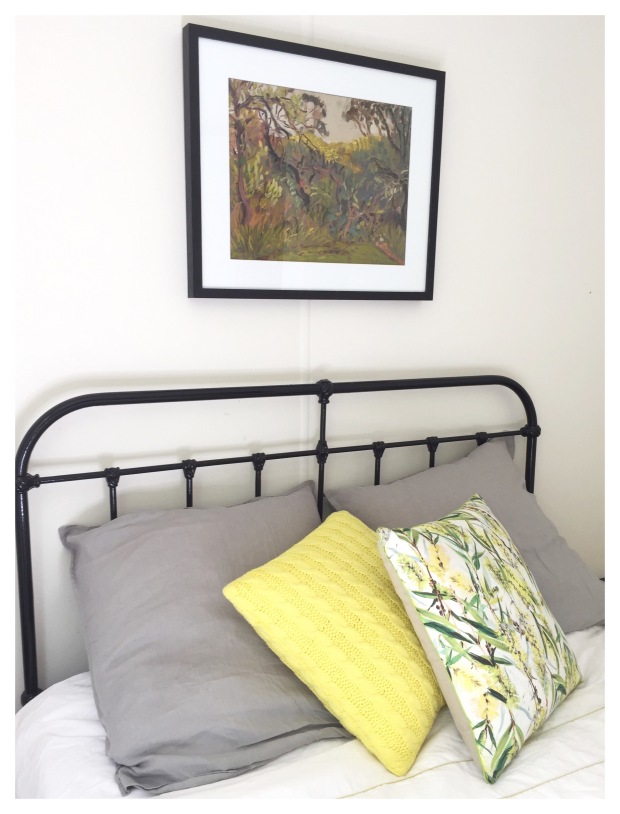 The oil painting by Stephen Armstrong and the printed pillow by Jacqui Baxter were Elise’s starting point for this room.

The yellow knitted cushion came from the Brotherhood in Brunswick.  The grey linen European pillowcases came from the Laura Ashley outlet shop at  Nunawading.  The doona cover came from the Salvos at the north end of Smith Street.  Elise found the bed frame on Gumtree. 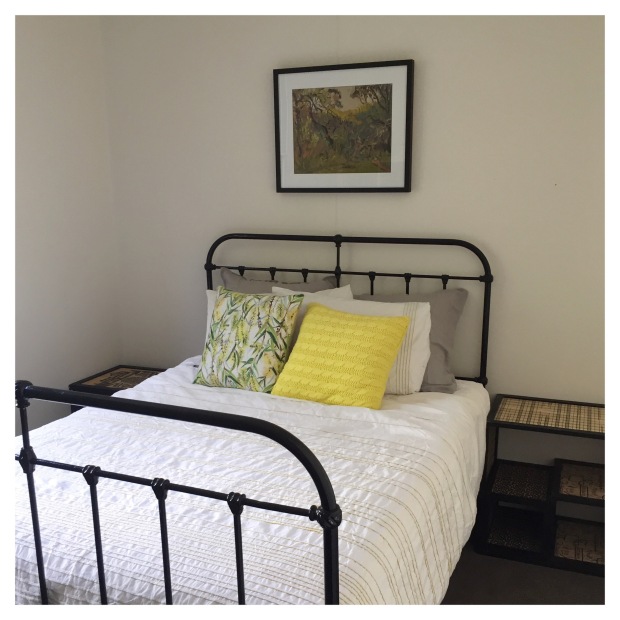 I found the stackable cube bedside tables at the tip shop last week.  $20 for 8 plywood cubes each screenprinted individually inside and out – what a bargain! 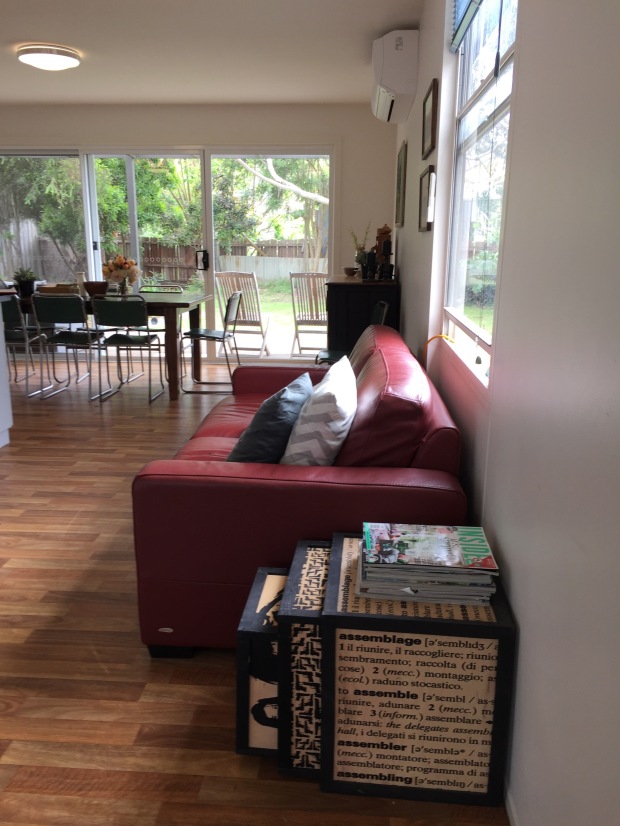 Here are some more being used as a coffee table in the back room.  Great huh?

This red leather sofa bed sits opposite the kitchen, providing a good place to chat to the chefs.  It is seriously the heaviest and most solid couch ever made (and a nightmare to move around).  I don’t know how Elise and Mum managed to collect it.  It looks good but! 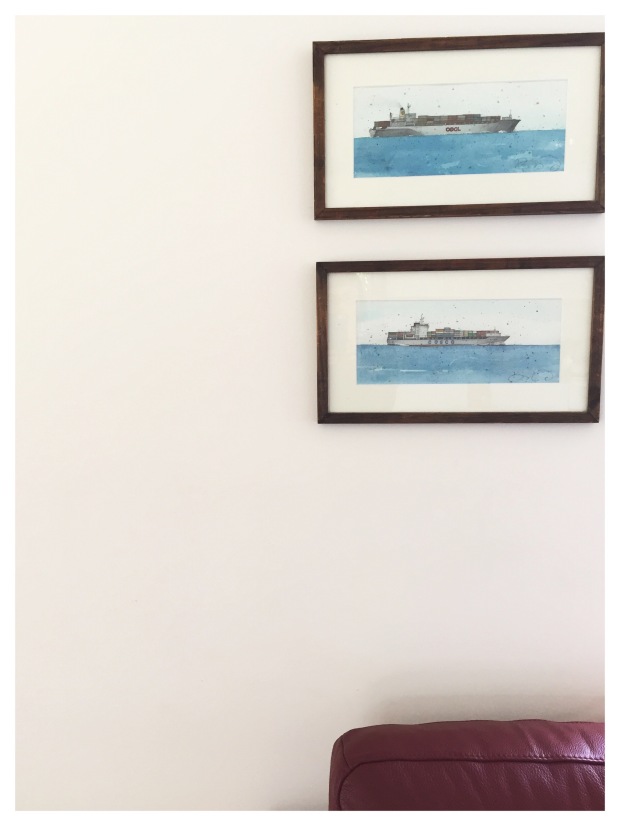 Another donation to the cause from me, my little boat pictures (I spotted them at an op shop, and Elise gave them to me for Xmas last year) but they really do belong at a house near the sea!  The blue in them matches the kitchen (the one thing in the house that could do with an update).

And here’s the dining table. 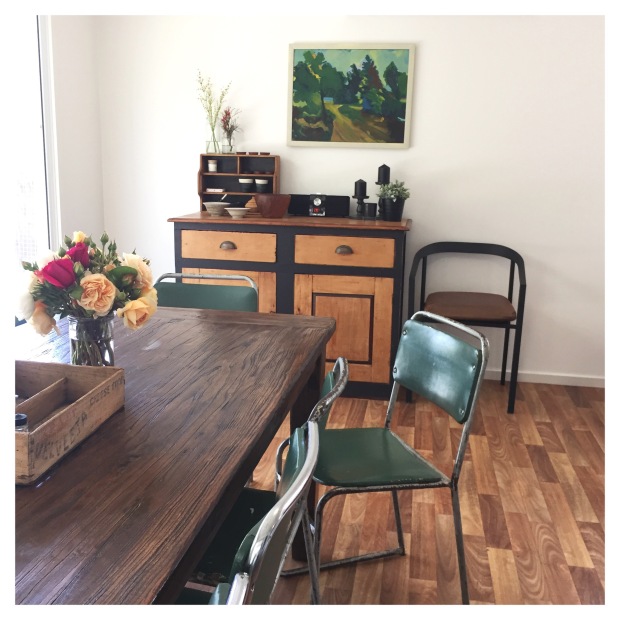 Originally from Dare Gallery, but bought for $100 by Elise and collected from Thornbury.  The green chairs were $10 each from the Reservoir Girl Guides hall on Edwards Lake.  Up the back is the chair I found on a Langridge Street sitting next to Elise’s old kitchen island bench.

Flowers from Merryn’s garden!  Oil painting from EBay.  And a nice collection of pottery and wood and glass jars.  And flowers from the garden. 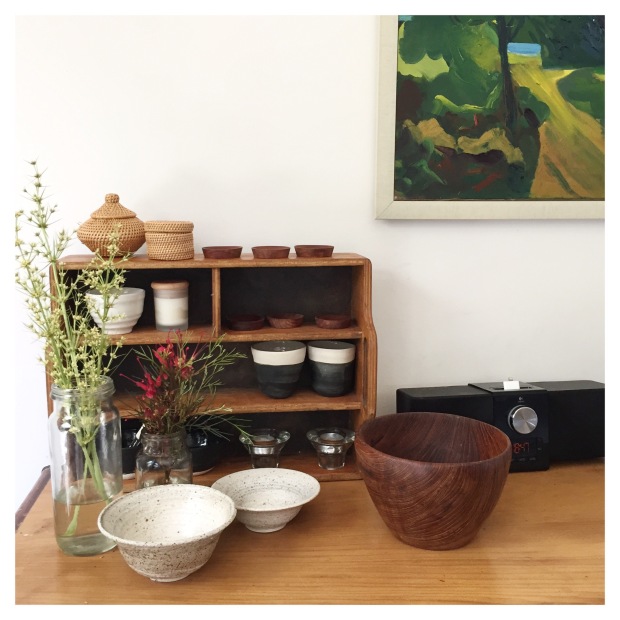 The mighty in our family have fallen.  Scarlett got sick 2 weeks ago.  But we survived pretty much unscathed (India and I both felt queasy and tired a day later, and that was it).

But then … Clive was struck down last Friday on the way home from 4 days at Falls Creek … a good 2 weeks later.  He thought it might have been the chicken sandwich he had for lunch – which combined with the windy trip down the mountain followed by fish and chips at the bottom did seem plausible.  He felt so bad he had to stop and so he and the kids checked in to a motel at Millawa and did the long haul drive down the Hume the following morning (au revoir $200).

I kept a wide berth.  But I half believed Clive’s take on the sitch … And did allow the kids to have sleepovers and live in the pockets of their friends for the following 24 hours.

Fortunately India had come back from her sleepover on Sunday at 2pm when she went to get a drink and unexpectedly vomited in the kitchen sink (ew!).  I quickly sent Lola home hoping that we weren’t spreading the love.  I wasn’t optimistic.

But iron-guts Jemima … It truly didn’t cross my mind that she’d get it.  Which in hindsight was foolish. The phone call at 9pm Sunday announcing that Jemima had chucked up on her friends kitchen floor (ew! ew!) was more of a shock than it probably should have been.

So, with 2 weeks off work I spent Sunday night to Wednesday nursing the darlings back to good health. Although they were only violently ill for 12 hours it took them 2 more days to start eating properly and stop sleeping all the time.

On Wednesday when we were nearly mended I plucked up the courage to contact our potential victims … Fortunately we don’t seem to have infected anyone else at this stage.  Which is just plain lucky if you ask me.

So, what did I do with myself in my housebound world?  Apart from a mountain of washing?  Great that you asked, because I kicked butt in the tidying stakes! 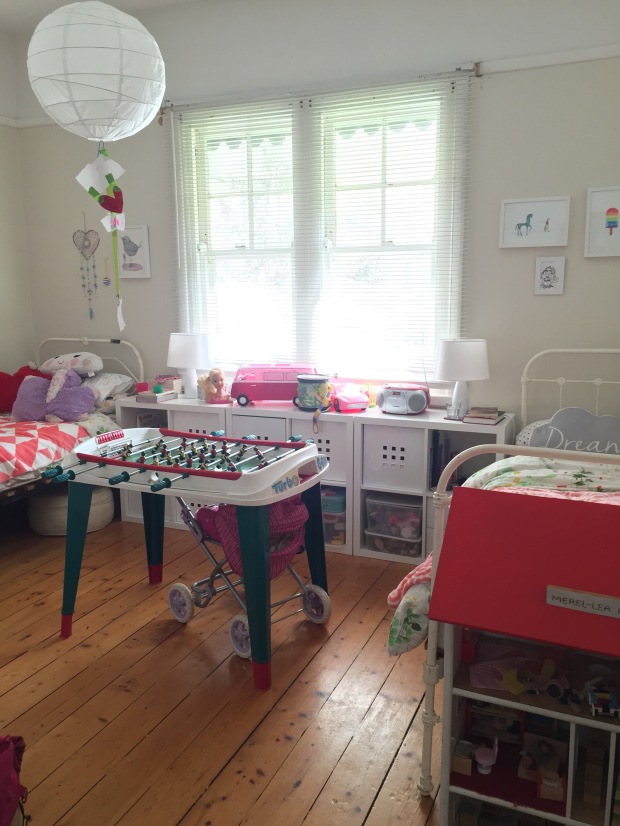 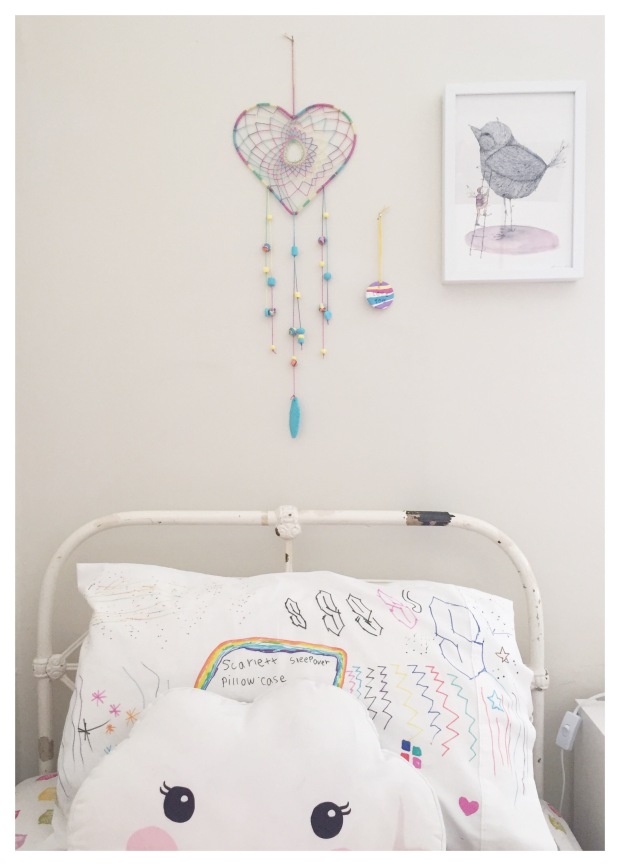 I cleaned the girls room top to toe.  I found a place for everything, including Scarlett’s birthday present dream catcher that we bought in the Art4All gallery shop.  And I created a junk box.  My plan is that everything in it is going in the bin if it hasn’t found a home by the end of the holidays.

Then I spent 2 days in India’s room.  Hello desk … It’s nice to see you again! 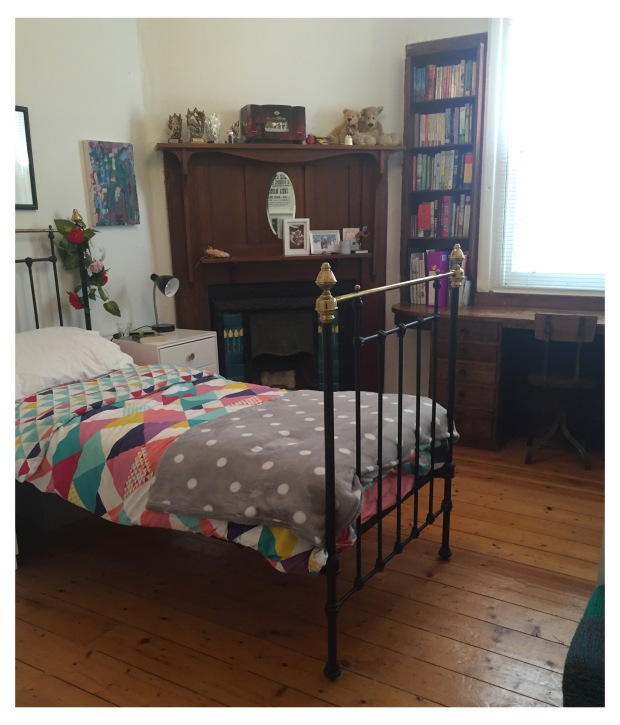 Next I hung blinds, rearranged pictures and generally cheered myself up by decorating around the cracks in the walls and the tired paint job. 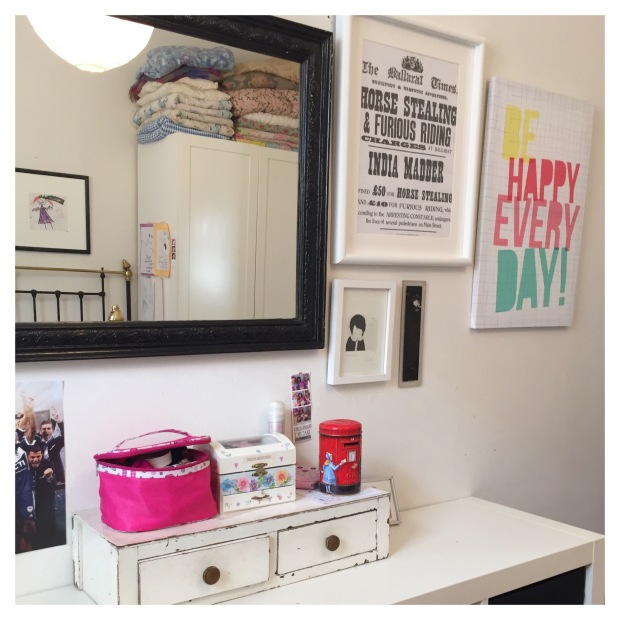 And finally I booked a hard rubbish collection with Council for two weeks time and put the broken washing machine and dryer on Gumtree for free (amazing that after a month in the garden they were picked up within a couple of hours of my ad going live).

To finish off my hard work, this weekend I am giving lessons on ‘weekly room cleaning for primary school children’.

It’s going to be real-life hard-core stuff (happy to instruct other children in the 8-12 bracket at the same time if you’d like).

1. Wipe all benches, bookshelves, bed ends and desks (a friendly little welcome to the world of less is best).

I am sick (not gastro sick but bloody sick) of doing it all myself.

And next week?  Next week I look forward* to stepping out of the house a bit more often.  And I can’t wait for children’s bedrooms that magically clean themselves …

Sometimes I wish I lived on a farm. Maybe Mezzy’s with this spectacular view of the Grampians. 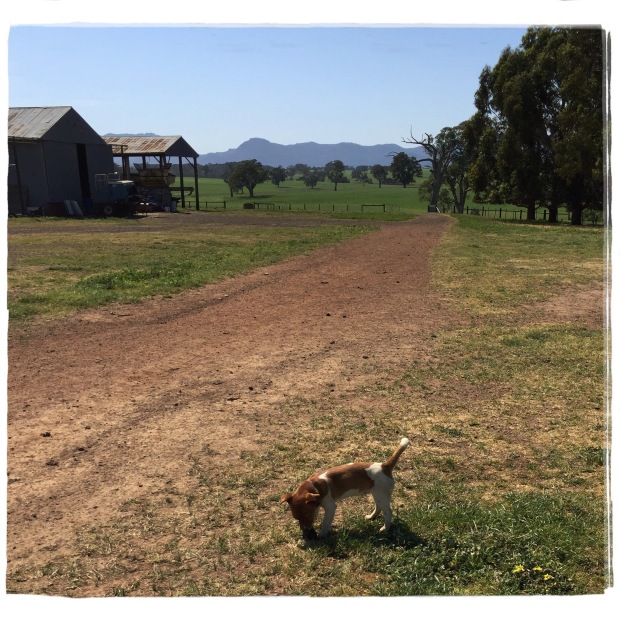 Or Lu’s with this view … 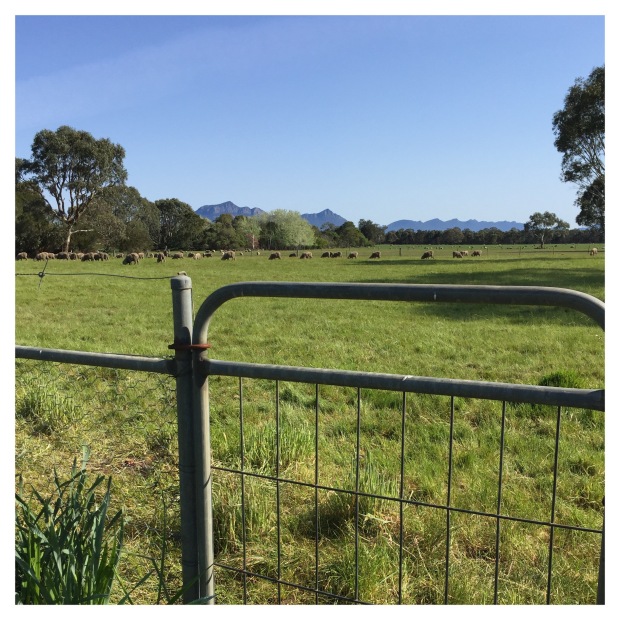 But the real reason I want to live on a farm is for things like this! 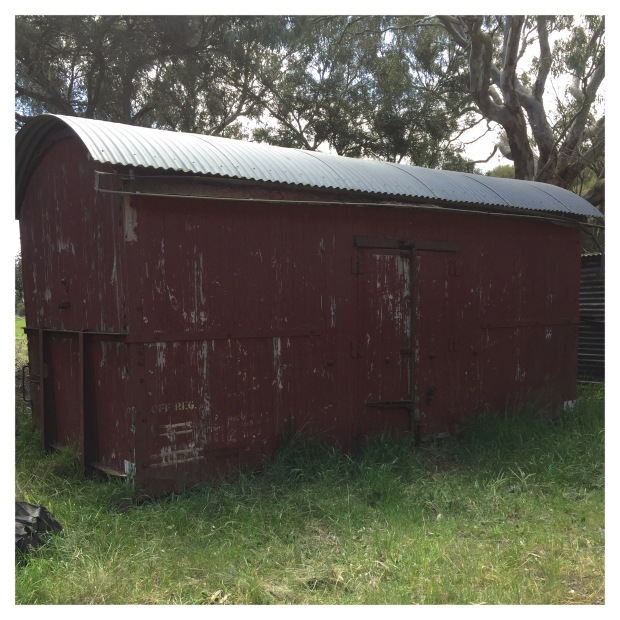 Lu has been telling me for ages that she wants to renovate a train carriage for her office. Sounds like a good idea I thought.

But until I went to the farm on the holidays and actually checked out the carriage she had there – and that has been there like forever sitting in a corner storing oil barrels and farm chemicals (for goodness sake) – I was a bit non-committal in my enthusiasm.

But now … OMG. It is quite frankly the best train carriage you ever did see. Lined with timber on the inside. Insulated like you wouldn’t believe. Amazing. And a project of manageable size. I hope Lu gets on with it like, next week. 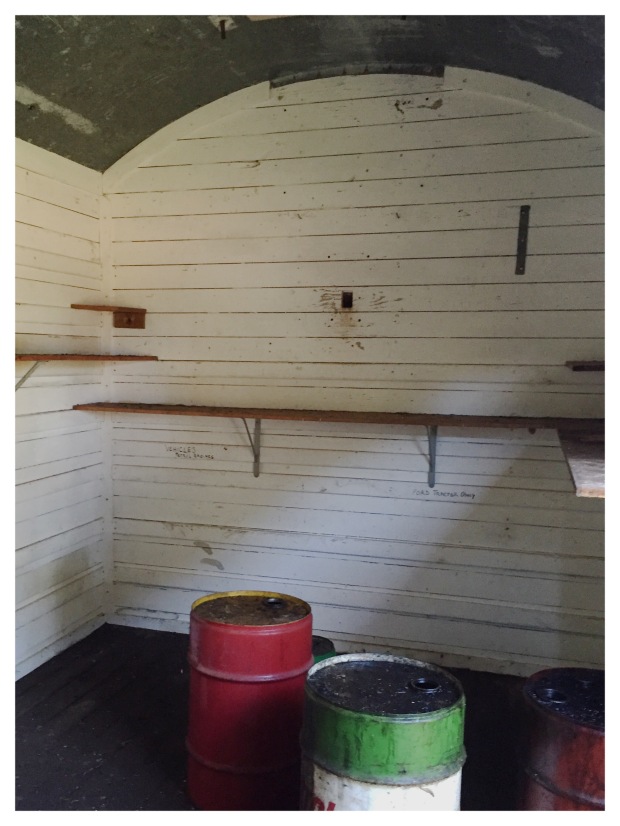 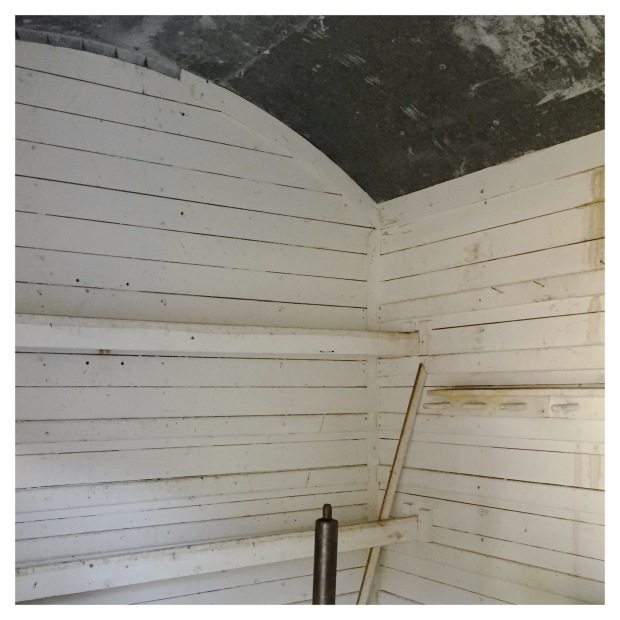 Go Lu, go! Get it moved to somewhere on the farm with a great view and access to power. Paint it. Whack in some glass doors. Build a verandah … It’s gonna be so ACE!