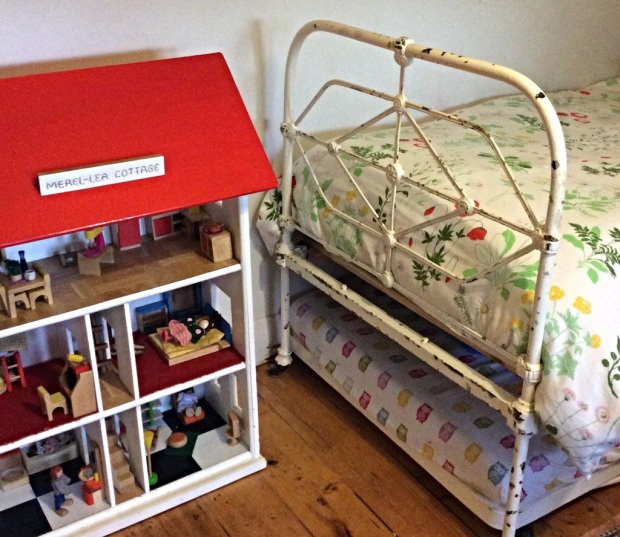 My grandpa (my dad’s dad) loved us so much.  He died suddenly when I was in Grade 6, but I have THE BEST memories of him.

He spent hours with us – drawing and painting and telling us his opinions about everything (for example I remember he barracked for Essendon and didn’t like Lou Richards – I think just because Lou was equally one-eyed about Collingwood).  Clearly we were there quite often for the footy show!

We did stay over at nan and pop’s regularly on the weekends and he endlessly read us stories in bed in the morning.  And he played hide and seek with us and gave us pocket money and took us on walks in the foothills of the Dandenongs.   He had oodles of time and energy for us.

And he did other special things for us.  Like make this dolls house. He made it for Elise and I (we’re twins) the year Merryn was born (1976).  And he signed his work, and wrote a special message in it.

And named it after his three grandchildren Mer (Merryn) El (Elise) – Lea (that’s me!) Cottage.

In the attic it says, ‘made with loving motivations by ‘grampy’ Coughlin for his darling grandaughters Elise, Leanne and Merryn and all the little darlings who come along after. For our ‘two girls’ 4th birthday 26.7.1976′. Isn’t that lovely!

When my oldest was little my mum and dad spruced it up for her.

Dad gave it a paint and added on the little name plaque on the front.  Mum did some interior design (some new lino and carpet and some very artistic paintings on the walls).  And dad made some stairs.

I bought one of those wooden family sets and a nice set of wooden furniture for it (see I do buy nice new things sometimes). My kids have used it for 8 years or so, and it’s holding up pretty well.

I am writing about it today as I found it all set up so beautifully yesterday when I went into the girls room. Often it is a bit chaotic (furniture just chucked in randomly) but every now and then someone takes the time to make the beds and put people in them, set up the lounge room nicely and sit people down to watch telly … and cook a roast. 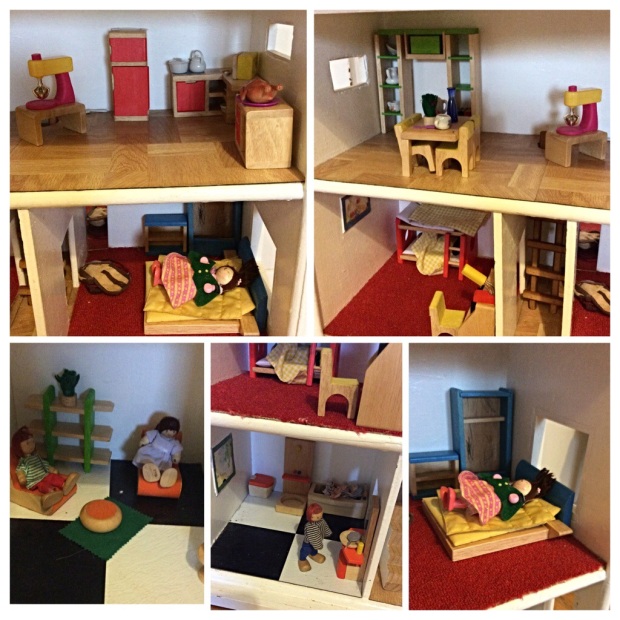 I love it that I have this dolls house with so much documented history to pass on to my kids (and that they will be able to pass it on to their kids and tell a story about my grandpa who they never met).

And doesn’t it look great with the Ikea ‘heritage’ doona covers in their room … I found them second hand at Savers and then a mum from school (Emily) told me that she had the same doona cover when she was growing up, so they must be 20 years old … there’s a story or two behind everything at my house!